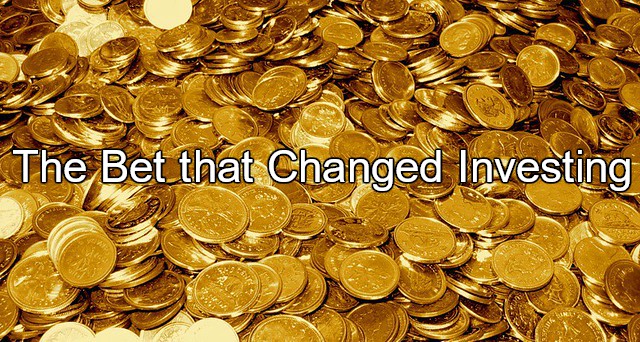 today I am going to talk about bet that change investing the world. And how it will change view investing make see that investing is just for the elites

Warren Buffett publicly stated that over a period of ten years, by picking only one share would outperform any hedge funds and that he was willing to bet $1 million on it.

For those of you who don’t know a legendary investor an OG of investing and one of the wealthiest people in the world, worth $88 billion — challenged the hedge fund industry.

Berkshire Hathaway has averaged an annual growth in book value of 19.0% to its shareholders since 1965 (compared to 9.7% from the S&P 500 with dividends included for the same period)

As of February 2019, Berkshire is the fifth-largest company in the S&P 500 Index by market capitalization and is famous for having the most expensive share price in history with Class A shares costing around $300,000 each. About the price of a house.

It would be like this guy changing you to fight. That Jeff monsoon former MMA heavyweight UFC fighter with record 61 wins and 28 loss. Who has fought for the UFC title. You know your limits.

So nearly year went by before someone took him on this bet. This brave hedge fund “created a diversified basket of hedge funds (in the fund of funds structures) with five different strategies (quant trading, long-short, macro, etc.). He was confident that they would easily outperform the S&P 500.”

If worth noting this happen during the Great Recession and in 2008 warren buffet stock pick lost 34% 2018 and lost 54% of its worth in march of 2009. And the hedge fund was winning

Oh no you may be thinking the oracle going to lose your bet relax. They don’t call him the oracle because some dumbass army guy. If by magic that share price start increase was, he really oracle. Will get to that.

After the 10 years the bet. The winner was drum roll please. And still the undisputed investing champion the oracle warren buffet. He gave his winning to Girls Inc. an Omaha charity.

The results were warren buffet shares gain 125.8% return over ten years. The five hedge funds, picked by a firm called Protégé Partners, added an average of about 36%

You may be thinking wait how did he win. I though hedge funds were really good beating markets.

How did he win.

First off hedge funds rely on people not to have information. They use wizard of oz technique hope people don’t look behind the curtain.

most hedge funds last about five years, and that one in three fails on an annual basis.

The share Warren Buffett bet on was the s and p 500 index. Each share is made up of the 500 large companies listed on stock exchanges in the United States. S and p 500 index fund was created by John C. Bogle and his company vanguard.

In 1951, for his undergraduate thesis at Princeton University, John C. Bogle conducted a study in which he found that most mutual funds did not earn any more money than if they invested in broad stock market indexes. Even if the stocks in the funds beat the benchmark index, management fees reduced the returns to investors below the returns of the benchmark.

As buffet bet prove this is still the case today.

average annual total return of the index, including dividends, since inception in 1926 is about 10%

Also index fund are low cost when compare to hedge funds and are more tax effective.

For people outside the us investing in etf s and p 500 fund may be more tax effective to you. This is something you will have to check yourself

Put 10% in short-term government bonds and 90% in a very low-cost S&P 500 index fund. (I suggest Vanguard’s.) I believe the trust’s long-term results from this policy will be superior to those attained by most investors – whether pension funds, institutions or individuals – who employ high-fee managers.

As his beat proved he is right. He is a man who but money where his mouth is.

And c u next time on young wolf media.