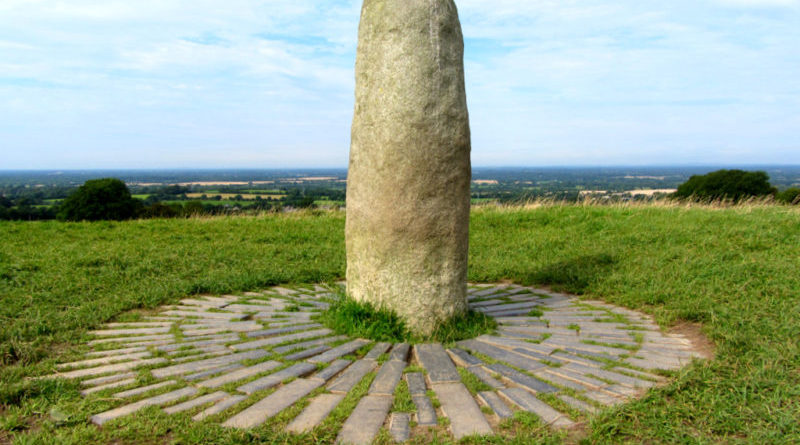 But throughout Ireland history there have been a number of capitals.

Probably the very first capital of Ireland was Hill of Tara located in Co. Meath.

This would of happen between 7th century-12th century During the Celtic Ireland time period.

As time Ireland was split up into a number of Kingdoms. The high king of Ireland over a hierarchy of lesser kings hence he was High King.

One of the reasons I have heard for the Hill of Tara was chosen as a capital was because it was near the centre of Ireland so it was easier for all lesser king of Ireland to come to if they needed to meet with the High King of Ireland.

It you look at map it shows hill of Tara was located in the kingdom of Mide  which means centre in English. Stone of Destiny seems to be pointing out to all Stone of Destiny

On the 10th of May 1642, the Confederation of Kilkenny (also known as the Irish Catholic Confederation) was set up to govern Ireland. It created a green flag with a harp (pictured below), both of which are now recognisably strong symbols of Ireland throughout the world today. Although it was not the first use of the Irish harp on a flag, it was the first time that the colour green was used.

The Confederation was composed of mainly Irish Catholic nobles, clergy and military leaders from the Irish Rebellion of 1641. It made Kilkenny the Capital of Ireland. The Confederation had a parliament called the General Assembly, an executive council called the Supreme Council, and a military. It pledged it’s allegiance to Charles I who was a follower of the Anglican church, yet married a Roman Catholic.

It was formed in the aftermath of the 1641 rebellion, both to control the popular uprising and to organise an Irish Catholic war effort against the remaining English and Scottish armies in Ireland. It was hoped that by doing this, the Irish Catholics could hold off an English or Scottish re-conquest of the country.

Carlow was the capital of the Lordship of Ireland from 1361 until 1374. This is surprising second smallest county in Ireland as you can see from this map.

Lionel, the son of King Edward III of England, moved the exchequer from Dublin to Carlow Castle for a time during his Lordship of Ireland. As a result Carlow became the capital of Ireland in 1361. The town remained the capital until 1374 when the exchequer was moved back to Dublin due to the instability of the area because of attacks by local Gaelic clans.

Belfast became the capital of the new entity of Northern Ireland as the island of Ireland was partitioned.

Belfast blossomed as a commercial and industrial centre in the 18th and 19th centuries and became Ireland’s pre-eminent industrial city. Industries thrived, including linen, rope-making, tobacco, heavy engineering and shipbuilding, and at the end of the 19th century, Belfast briefly overtook Dublin as the largest city in Ireland. The Harland and Wolff shipyards became one of the largest shipbuilders in the world this is were the titanic was made

Cork city surprisingly has never been capital of Ireland. As I though that one point they would have been the capital of Ireland. But interesting to note  the city’s slogan of “the rebel city” originates in its support for the Yorkist cause in the Wars of the Roses. People from Cork often refer to the city as the real capital a reference to its opposition to the Anglo-Irish Treaty in the Irish Civil War.

The End of British Rule By 1923, Dublin was the capital of the Irish Free State as it at this current time. I think one of the major reason why Dublin is the current capital and the reason in the past it was capital is due to the location. Dublin near wales, England and Scotland and France by boat. Even look at map on your screen Dublin is with easy flying distance to most of the other major capital cities of Europe. Therefore, for trade reasons it makes sense. When England rule Ireland is made sense for Dublin to be the capital as it was the easy location for the engllish to get to due to Dublin port.

Throughout history it not usual for capital citys to change for example in 1960s Brazil capital was changed from Rio de Janeiro due to overcrowding to Brasilia and Nigeria built a new capital in 1991 in Abuja to replace Lagos is the largest city. The site was chosen for Nigeria’s new capital because of its central location, easy accessibility, salubrious climate, and low population density and the availability of land for future expansion. This shows maybe in future that the capital of Ireland can change to another City in Ireland. However unlikely

Thanks I hope you have good day.

One thought on “Ireland forget capitals”