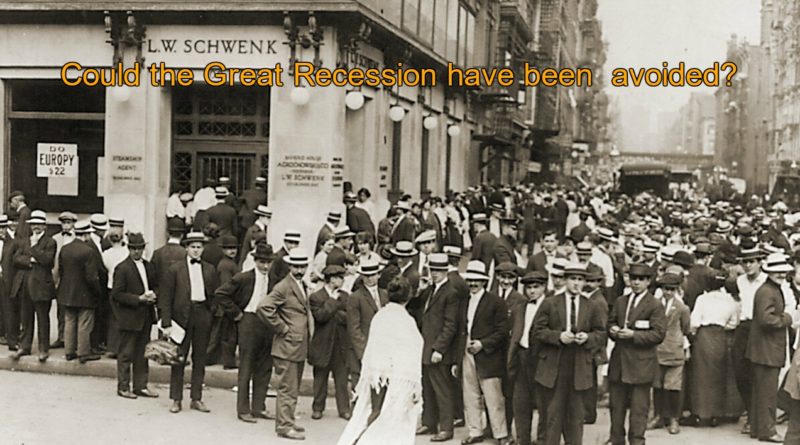 Welcome to young wolf media I hope everyone well.

today video is could the great recession have been avoided?

This is way sequel my video Irelands housing crisis.

For thought of you don’t worry this video will not be focus on Ireland but the wider economy.

First of all as Isaac Newton said “What goes up must come down.”

This is true even with economics. recession is a part of the economic cycle. As a rule of thumb recession happens every ten years.

Recession has benefits to economy such as Greater efficiency – enabling economy to more productive in long term. A recession tends to be a shock and inefficient firms may go out of business, but in recession – new firms can emerge. Falling asset prices can make it cheaper to buy a house. Good for first time buyers.

So look recession happens its part of natural economic cycle. So, it that way recession cant be stop.

However the great recession was not a natural recession in that it could have been as I am going explain prevented.

These two quotes are really going to summarise this situation

‘Those who do not learn history are doomed to repeat it.’ George Santayana

Albert Einstein: The definition of insanity is doing the same thing over and over and expecting different results.

Both the Great Depression 1930s and Great Recession 2000s the similarities. Both were preceded by periods of prosperity. Both came at a time when banks were experimenting with new ways of doing business (consumer credit in the 1920s and pooling mortgage debt also known as subprime loans in the 2000s). Florida was the sign of both of these events. I only discovered this reading the book The Great Crash by John Kenneth Galbraith. The book is about how the Great Depression started. similarities between Great Depression and Great Recession were eerie

in 1920s Florida real estate market and in the 2000s the book and film the big short a non fiction book it shows that by going to Florida they were able to discover the housing bubble that was about burst by seeing people getting housing loans who shouldn’t have in other words sub prime loans were bad loans.

In other word these events were cause by risk behaviour of banks.

During the Panic of 1907 many USA bank failed the Knickerbocker Trust sounds like history repeating itself yet again.  Primary causes of the run included a retraction of market liquidity by a number of New York City banks and a loss of confidence among depositors, exacerbated by unregulated side bets at bucket shops. The cause of this basically was new form of banking Trust companies only exacerbated the situation. These were a new form of financial intermediary that functioned as a bank, albeit with a fraction of the regulation. They were able to own stock directly and had lower reserve requirements. In other word an unregulated market sounds familiar.

Recession cause by bank or financial institutes are much worse for normal people because it will affect there day to day life as the economy need a functioning financial system to operate, they could lose there saving if the bank goes bankrupt. It causes housing crisis which happen a crossing the world. You check out my video link below to check out for more information on this. It stops new business from be create because they can’t get business loans a lot of old business struggle and go bankrupt not because they were not good business simply because they couldn’t get loan because of bad cash flow they go out of business which cause increase in unemployment.

This is much worse than recession cause by speculative investments which mostly effect investors a small a small percentage of people.

Now I remember talking to someone at event. We were talking about banks. I said sure every time a banks become unregulated in America their soon or later massive bank failure.

This person said sure these people working in bank are smart they know what they are doing.

As soon as he said though of quote from the big short Georgia Hale: I’m sure the world’s banks have more incentives than greed.

You may be thinking is there solution to stop in this risky behaviour from banks.

During Great Depression 1930s  and Great Recession 2000s and failures of the private investment bank Jay Cooke and Co. (the 1873 crisis), the Knickerbocker Trust (the 1907 panic) the Canadian banks during both periods extremely stable banking system the reason for both time was because Canada’s regulatory regime prevented the Canadian banks from engaging in the sort of risky behaviour observed elsewhere. Both times Great Depression and Great Recession no Canada banks had any bank failures especially in the US , no bailouts when compare to the big bank failure of the USA on both times. So big lesson here banks need to be regulated to stop this risk behaviour.

For more than a century, the Canadian system has proven itself far more stable than its U.S. counterpart.

It would be worth looking at installing a similar banking system in Ireland and other countries to stop this madness.

Thank you for watching c u next time

One thought on “Could the Great Recession have been avoided?”